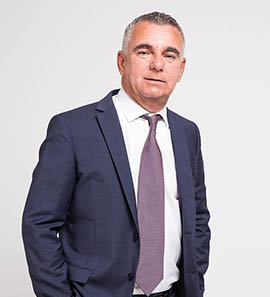 Born in 1958, has more than twenty years of experience in the world of retail distribution

IGD launches a new, important institutional campaign: “I’m possible, the place where everything is possible” 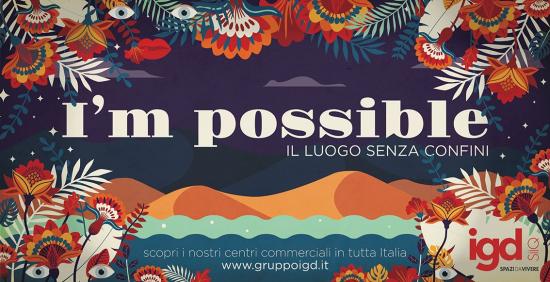 Last 14 October IGD launched a communication campaign to reposition the image of seven of its key shopping centers in Italy: ESP in Ravenna, Tiburtino in Rome, Centro Sarca in Milan, Katanè in Catania, Centro d’Abruzzo in Chieti, Le Porte di Napoli in Naples and Le Maioliche in Faenza.

The message at the heart of the campaign is: “I’m possible, the place where everything is possible”. The claim, combined with suggestive creativity, give new strength and meaning to the IGD brand.

We spoke about it in greater detail with Daniele Cabuli, IGD’s Chief Operating Officer and Commercial Director.

What led to you to launch this first communication campaign focused on your brand?

The Business Plan that we presented in 2018 outlined clearly how our shopping centers will change moving forward in the transition from shopping centers to providers of shopping experiences and entertainment. We are aware that this transition must be supported by a series of concrete changes: certainly in terms of a different merchandising mix, with a greater number of services offered, but also through new ways of engaging visitors. We want to work on this together with our tenants, the real drivers behind the change in the shopping center’s role, fostering a better understanding of how our spaces are evolving.

So it was a very strategic decision…

Strategic reasoning was certainly behind our decision relative to the new campaign. We also have another more immediate and tactical reason, however, which pushed us to make it right now. As consumption continues to be weak, we felt the need to incentivize traffic above all in the shopping centers where footfalls have fallen the most. This led us to ask the Board of Directors for more resources in order to give life to a series of truly decisive marketing initiatives, capable of increasing the number of visitors. Part of this extra-budget was dedicated to the “Grande Concorso”, a sweepstakes that was held in 25 shopping centers in September with almost a million tickets played which had a positive impact on retailers’ sales. Another portion of the extra-budget was used for steps taken to support two shopping centers specifically, Puntadiferro and Città delle Stelle: for every 10 euros spent, 20 euro coupons were distributed to be used in subsequent days in the same mall. The largest part of the additional resources was, however, used to develop and finalize this communication project targeting seven of the shopping centers in our portfolio.

How did you select the seven centers that the initiative focuses on?

In order to ensure the most effective impact, we decided to target our most valuable shopping centers.

What did you do to implement the campaign?

We called upon seven agencies that had never worked with IGD, in order to benefit from an “outside” view of our company, to tender an offer. We then chose one of the creative solutions developed by H-57 Creative Station.

What are the characteristics of the proposal you chose in terms of messages and graphics?

The creative and artistic directors, in response to the indications we provided during the initial briefing, centered the campaign around the concept of the shopping center as a place where peoples’ dreams can come true and the claim “I’m possible, the place where everything is possible”. The message was then developed using dreamlike images which were adapted specifically for each of the seven shopping centers. The agency created a dimension parallel to the daily routine during which people can find a special time dedicated to themselves, family and friends in a shopping center which becomes a veritable “space to be lived in”. H-57’s proposal convinced the entire committee formed to select the campaign, comprised of members from different divisions of IGD: the campaign was unanimously approved.

What media plan did you put into place?

Through the media center Life, we optimized the planning of the campaign using the media mix most suitable to meeting our target for footfalls. We, therefore, avoided spending resources on more costly means, such as daily newspapers, to focus on spots on local radio stations with good penetration, a presence in cinemas, video clips on social media and signage along city streets. Naturally, outside and inside the seven shopping centers highly visible totems were introduced, along with flags and banners. The key visual in each center has elements that reflect the local area, while also showing the logo and providing important information like the address, the number of stores and the website.  Inside each center a fairy tale environment was created in order to provide visitors with a truly engaging experience.

What are your target profiles?

The campaign targets a general audience, but we paid special attention to the youngest age group: the Millennials, on the one hand, but also on young students who should be able to find an answer to their dreams inside the shopping center.

What returns do you expect from this campaign?

As this is an institutional campaign, we are expecting a qualitative return, above all. We want to spread the idea that a shopping center is not just a shopping machine, but a place where what you want the most can happen. We have received very positive feedback and even the trade associations have expressed their appreciation for the contribution we have made to redefining the shopping center.

Is this the first time that IGD has been involved in this sort of institutional communication?

In realty no, it’s the second time. We have sponsored the A series basketball team, Virtus Bologna, for several years in order to make IGD known through a sport that is rich in values and very popular.

When exactly was the campaign launched?

On the 14th of October, for six out of the seven shopping centers involved. There was an important initiative underway at one of the centers so, in order to avoid any overlapping, we decided to postpone the launch of the campaign until 25 October. We have also planned to replicate the campaign again for two additional weeks beginning on 13 January. The idea is to use the campaign images, with the shopping center as a place for dreaming, in the events scheduled from now until the end of the year and for all of 2020. The messages and graphics of the campaign are effective and have universal appeal: we will, therefore, feature them and use them on every possible occasion.