Since its listing, IGD has been a member of EPRA (European Public Real Estate Association), the European real estate association with more than 250 members representing assets worth more than €430 billion and 86% of the market cap of the FTSE EPRA/NAREIT Europe index.

Founded in 1999, EPRA is a non-profit organization registered in Belgium. EPRA’s mission is to promote, develop and represent listed European real estate companies. This is achieved by providing information to investors and stakeholders, being actively involved in public policy debates, improving the general operating environment, promoting best practices, as well as uniting and strengthening the sector.

For more information you can visit the EPRA’s website.

In 2017 Claudio Albertini, IGD’s Chief Executive Officer, was appointed member of EPRA’s Advisory Board, as the only representative of the Italian real estate sector and he was confirmed for another term in 2020. 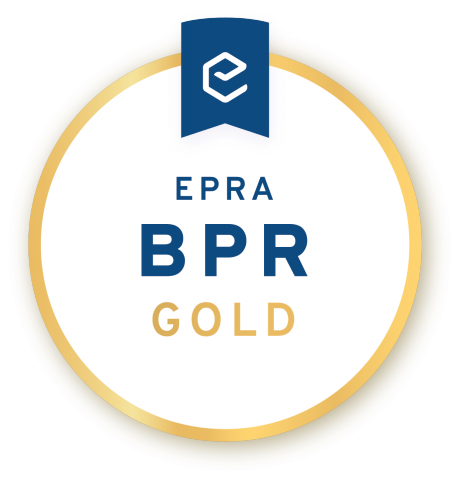 After having received the EPRA BPR Silver Award for 2 years in a row (2016 and 2017), in 2021, for the fourth time in a row, EPRA awarded us with the EPRA BPR Gold Award, the most important international prize which testifies our commitment to further increasing the transparency and comparability of our communication for the benefit of investors, the financial community and all the Group’s stakeholders.

Definitions of the each indicator are provided below:

EPRA Eearnings: is a measure of the underlying operating
performance of an investment property company net of fair value gains, gains and losses from the sale of investment property and a limited number of other items that are not considered to be part of the company’s core business.

EPRA “Topped-up” Net Initial Yield:is a measure calculated by making an adjustment to EPRA NIY based on the annualized rental income (including variable and temporary revenue) excluding any other temporary incentives such as discounted rent free periods and step rents.

EPRA Vacancy rate: the portfolio’s vacancy rate calculated as the ratio between the estimated market rental value (ERV) of the vacant premises and the ERV of for the whole portfolio. Given the different characteristics of the portfolio and the Italian market with respect to the Romanian one, the vacancy rate was calculated separately for each asset class and for the two countries.

EPRA Cost ratios: are ratios aimed at providing a consistent comparison base for a company’s main structural and operating costs calculated by expressing operating costs and general overhead, net of management fees and a limited number of other items, as a percentage of gross rental income. There are two EPRA Cost Ratios, one which includes and one which excludes direct vacancy costs.

EPRA Net Asset Value (NAV): is the fair value of the net assets calculated over the long term and on a going concern basis, based on the equity pertaining to the Group (as shown in the financial statements in accordance with IFRS standards) net of certain assets and liabilities that are not part of normal operations, like the fair value of hedges or the deferred taxes on market appraisals of the properties and hedging instruments.

NET REINSTATEMENT VALUE (NRV): The objective of the EPRA Net Reinstatement Value measure is to highlight the value of net assets on a long-term basis. It represents the repurchase value of the company, assuming the company does not sale any properties and is calculated based on the equity attributable to the Group (as shown in the IFRS financial statements), excluding the fair value movements on financial derivatives and deferred taxes on property valuation surpluses.

NET TANGIBLE ASSETS (NTA): the underlying assumption behind the EPRA Net Tangible Assets calculation assumes entities buy and sell assets, thereby crystallizing certain levels of deferred tax liability. It represents a scenario in which a few properties could be sold. At 30 June 2020 the company does not have any assets which could be sold and for this reason the deferred taxes coincide with the amount excluded from the NRV calculation. Contrary to NRV, the goodwill and the intangible assets included in the financial statements are excluded from the equity attributable to the Group.

NET DISPOSAL VALUE (NDV): represents the stakeholders’ value under a disposal scenario, where deferred tax, financial instruments and certain other adjustments are calculated to the full extent of their liability, net of any resulting tax. In this disposal scenario goodwill is excluded from the Group’s portion of equity, while the fair value of debt is included.