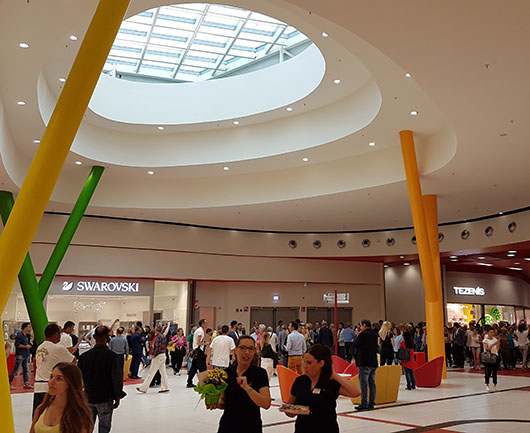 At the beginning of 2018 IGD – an Italian company – decided to be part of the Sustainability Committee of EPRA (European Public Real Estate Association) and participated in the Meeting held on 23 May in Brussels. This decision is consistent with the Company’s active participation in this important international association of which Claudio Albertini, IGD’s CEO, has been a part of since September 2017 as a member of the Advisory Board. It also reflects the desire to be part of the international debate on sustainability, a path begun in 2015 with participation in the International Council of Shopping Centre (ICSC)’s Sustainability Group.

Being part of this reality represents an important opportunity to meet with big European sector players and discuss both current, as well as future, sustainability policies. Important topics emerged from this first meeting, particularly pertinent to the integration of the Company’s new Sustainability Plan in the Business Plan.

Together with the other companies present, IGD also learned more about and discussed the choices made by the European Union with respect to sustainability, assessing their impact and defining a shared view to bring to the attention of the political institutions.

What is the main mission of EPRA’s Sustainability Committee?

THE ESP CENTER IN RAVENNA RECEIVES AN AWARD

The extension of the ESP Center in Ravenna received the “CNCC Design Award” for “Refurbishment”. This award seeks to reward the new projects and refurbishments of the centers affiliated with the Consiglio Nazionale dei Centri Commerciali (CNCC) which stand out for architectural quality, technical merits and sustainability.

With regard to the latter, the jury recognized IGD’s commitment to designing and building a property which could provide maximum environmental performance by using LED lighting, including a system for harvesting rainwater, along with a new bike path which connects with the city’s network of bike paths, 4 columns with charging stations for electric cars and solar panels on the roof of the new building.

Significant results have been achieved: the energy consumption at the extension is about 80% lower than the original structure thanks to the energy saving measures implemented during construction which allow for significant savings in terms of heating, cooling and lighting.

a circular economy model which facilitates the conversion of the food scraps and waste produced in a shopping center into “second products” which can be put back into circulation under the form of products or services. The project was developed in partnership with Coop Alleanza 3.0, CAMST and Impronta Etica.

After a prolonged phase involving different stakeholders, the project REPOD was selected. This project involves the production of fertilizer from orange peels and coffee grounds. As subsequent testing proved that REPOD works, the prototyping phase was begun.

You can find out more about what is going on with the “Waste2Value” project on the website http://wastetovalue.it/.

IGD’S APPROACH TO MARKETING IS EVEN MORE STRUCTURED

Two years ago IGD’s Marketing Plans were changed significantly which resulted in the organization of events in each single shopping center. What was still missing in order to achieve a completely integrated approach was a control phase during which the validity of the events was assessed.

As of this year IGD has been checking every six months on the status of the marketing goals defined in January. Each shopping center is called upon to evaluate the events based on five distinct areas:

In this way the operating performance of each single center can be improved by defining the degree of satisfaction with the results achieved and creating a history which can be useful when making decisions for the future. The single evaluations are analyzed by the Marketing Division which can then develop a general framework which guides the investments of the shopping centers toward the best practices.