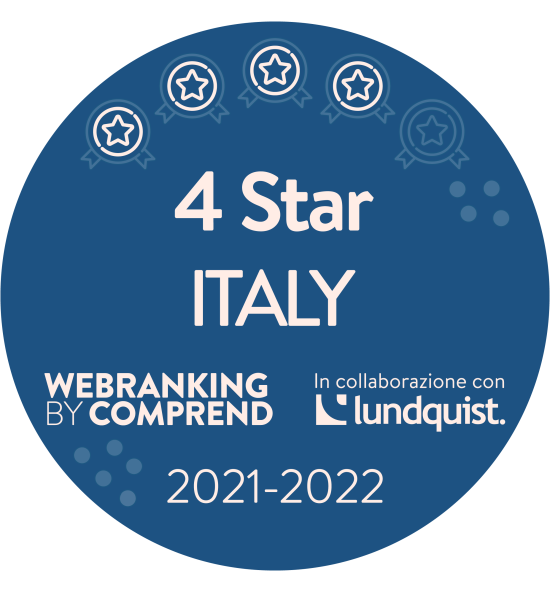 The 20th edition of the Webranking study by Comprend, conducted in partnership with Lundquist, marks an important milestone for IGD.  In 2009, when it was included in the basket of companies to be ranked for the first time, IGD came in 53rd with a score of 31.5. Today IGD reached its best position yet, coming in 12th with the best total score of 76.4.  The 4-star rating, awarded to companies that score between 65 and 80 points, was confirmed.  IGD was also included in a group of companies, the “Best Improvers” in 2021, thanks to the 8.5-point increase in its score and was also mentioned in the research as an example of best practice in “the clear and concise presentation of corporate identity and deepening the understanding of different aspects of the business”, the presentation of the core Corporate Governance principles and communication with financial analysts.

Furthermore, of the STAR segment companies analyzed (31 out of a total of 111) IGD was ranked second with a score that was double the segment average of 35.5 points which testifies to the ability to leverage on the potential of online communication to maximize transparency.

Lastly, in the sub-ranking European Real Estate, IGD was, once again, ranked first out of the 46 companies analyzed in Belgium, Finland, France, Germany, Spain, Sweden, Switzerland and the UK, with a score that was well above the sector average of 39.2 points.

The Webranking study by Comprend, conducted in partnership with Lundquist, is the biggest European survey of transparency in online corporate communication of the largest listed companies based on stakeholder expectations.  The 2020-2021 edition showed, once again, that transparency is key to creating trust, even more so during a period impacted by the health crisis when companies had to prove their credibility in effectively managing a moment of great uncertainty and change.  This year’s survey is the 20th edition and involved 111 companies which scored an average of 41 points, 1.3 points higher than in the prior year.

The recognition obtained from Webranking, along with the ever-growing number of users visiting IGD’s website, is confirmation that the Company has worked effectively to establish the clearest, most complete and transparent online communications possible in order to meet the needs of all its stakeholders.

For greater details refer to the whitepaper at https://lundquist.it/webranking/webranking-italy-listed-2021-2022/