In a business that is returning to pre-pandemic levels, IGD expects its FFO to improve significantly in the fourth quarter 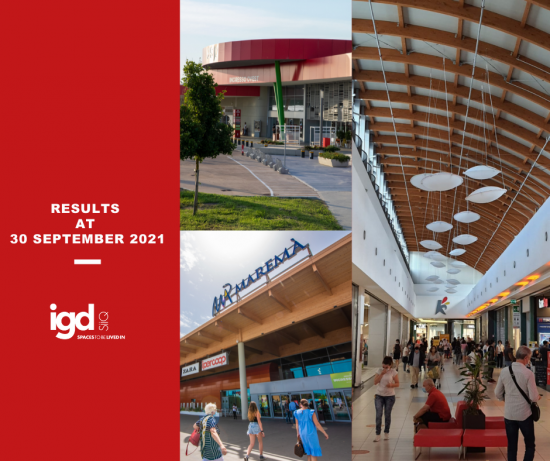 Even though the results at 30 September 2021 were, overall, affected by the anti-Covid restrictions, in the last few months – particularly beginning in June – there has been an improvement in the operating conditions with clear signs of a return to normalcy.

In the four month period June-September, retailers’ sales have already reached levels in line with 2019, even though footfalls are still down, while the net one-off impact of the anti-Covid measures amounted to €6.9 million, €1.2 million lower than in the same period of 2020.

The results achieved in the first nine months, combined with the decided recovery expected in the fourth quarter, due also to the positive effect of recent reletting, make it possible for IGD to confirm the FY 2021 FFO guidance of +7-8%, as well as resume paying a dividend to shareholders in 2022.

Since the lifting of the restrictions for shopping center businesses on 17 May 2021, in the four-month period June – September 2021 there have been positive signals, with the retailers’ sales in malls back to 2019 levels – which was also one of the best years since the 2011 crisis. There was a significant increase in the average ticket with respect to both September 2020 (+8.5%) and September 2019 (+21.7%) which suggest shopping is now more targeted.  In the first nine months of 2021 tenants’ sales in malls were, in fact, up 3.9% while footfalls fell 5.2%.

Looking at lease management, in the first nine months of 2021 124 renewals and 67 turnover leases were signed in Italy with a limited downside of 1.2%. The focus was on maintaining the same lease structure and basing tenant negotiations on temporary rent reductions and revised payment schedules. In Romania, where 205 renewals and 98 turnover leases were signed, there was even a slight upside of +0.41%.

Thanks to the continuous marketing and pre-letting carried out even during the lockdown periods, financial occupancy was up in both countries in which IGD operates: in Italy occupancy was 114 basis points higher than at 31.12.2020, reaching 95.4% at 30.09.21, while in Romania occupancy reached 94.93%, showing an increase of 133 basis points compared to the end of the prior year.

In the first nine months of 2021 net rental income fell €2.8 million (-3.1%) against the same period of 2020, coming in at €86.9 million. This change is attributable mainly to a decrease in the revenues of Italian malls (-2.9% like-for-like) – as the positive effects of the recent reletting of vacant spaces will be spread out over the coming quarters – as well as the slight increase (+€0.9 mn) in costs, attributable mainly to higher condominium fees and provisions. The negative effects were partially offset by a decrease in the net direct impact of Covid-19 which, at €6.9 million, was €1.2 million lower than the €8.1 million recorded in the first nine months of 2020.

Core business EBITDA amounted to €79.6 million in the first nine months of 2021, a decrease of 3.9% against the same period of 2020, attributable mainly to the drop in net rental income.

The Loan-to-Value fell from the 49.1% recorded at 30 June 2021 to 48.3% at 30 September 2021. If the sale of the portfolio comprising five hypermarkets and one supermarket to ICG for €140 million is taken into account, IGD’s pro-forma LTV is 280 basis points lower at 45.6%. Thanks to this transaction, for which IGD will receive net proceeds of around €112 million, the company will have the financial resources needed to cover almost all the FY 2022 maturities.

The increased solidity of the financial profile is accompanied by another positive factor, namely the revised outlook which on 30 September was changed by Fitch Ratings from “negative” to “stable”.

In light of these results and the expectations for the last quarter of the current year, IGD confirms the FFO guidance for FY 2021 of an increase of +7-8%, assuming there are no new Covid restrictions. Similarly, a dividend for 2021 is also expected to be distributed.