Shareholders receive a dividend of 22.8 euro cents while waiting for the strong discount to intrinsic value to narrow

The price of IGD’s stock continues to reflect the negative view that investors have of the retail real estate segment. While less penalized than the EPRA/NAREIT Developed Europe Retail Index, IGD’s stock price continues to trade at very compressed levels, as shown by the large discount with respect to the consensus price of the analysts covering the stock.

Greater visibility as to the nature of the fiscal measures that will soon be implemented in Italy to stimulate economic recovery and sustain consumption could cause investors to start making valuations  tied more to IGD’s fundamentals than to general sentiment which would allow the stock to express some of the encouraging elements that emerged in the half-year results.

In the meantime, on 22 July IGD’s shareholders were remunerated with a dividend of 22.8152 euro cents per share which represents 70% of the income generated by the SIIQ perimeter.  This allows the long-term shareholders to overcome this particularly penalizing phase for the stock price with a dividend that is, at any rate, significant. 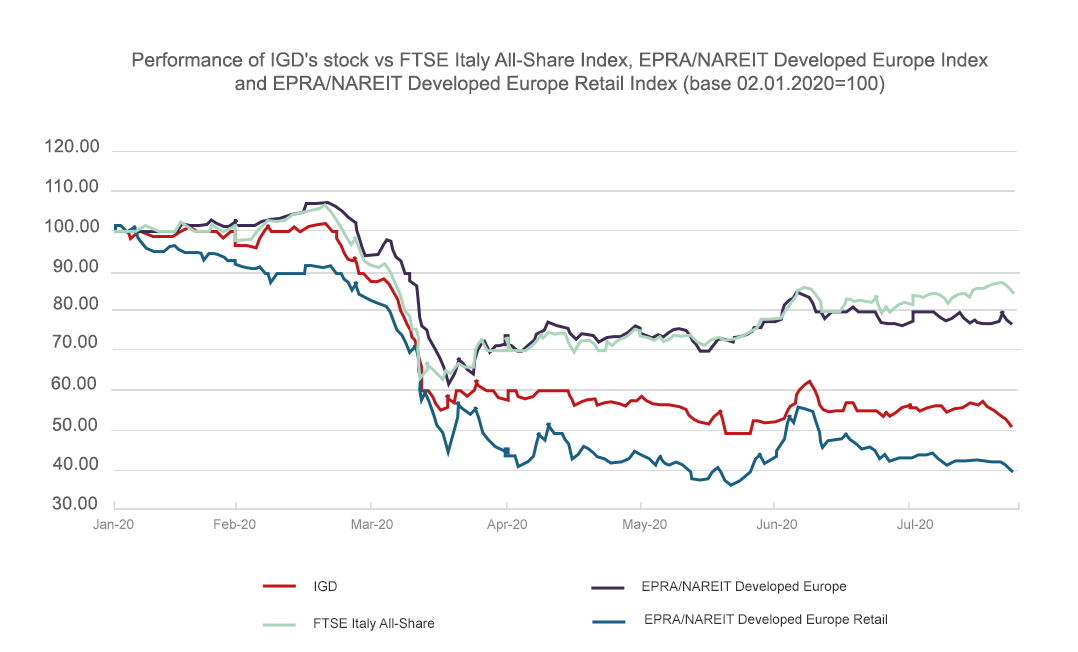 The rapid and profound correction experienced by the stock markets between the end of February and mid-March 2020, during the most acute phase of the health crisis in Europe, was followed by a gradual recovery as the lockdown measures were eased and economic activity gradually resumed The economic and fiscal authorities made considerable resources available to offset the recession and stimulate future growth.

This movement away from the mid-March lows affected both the Italian stock market index (FTSE Italy All-Share) and the European real estate index.

The retail segment index, however, is still trading at year lows as the shopping center management business was one of the businesses most impacted by the weeks of lockdown in terms of both the offer – with non-essential activities closed for weeks – and the demand, due to the limited mobility of consumers.

In this context, IGD’s stock performance was less negative than the European segment index. The market recognizes that having a food anchor in its centers, which were always open, and a very diversified presence, rooted in Italy’s domestic reality, in geographic areas that were somewhat less affected by the virus, plays to the Company’s advantage, as did the ability to react quickly once the lockdown eased which fueled a noticeable recovery in tenants’ sales.

It’s likely that investors are generally concerned that all the retail real estate companies risk seeing the mall retailers close as a result of both the economic crisis and the growing competition of online sales. The rate of occupancy recorded by IGD in the half-year report (95.63% for the Italian portfolio), however, confirms that the brands are still strongly tied to the physical presence. In IGD’s centers the drop in the tenants’ sales revenues was also less than proportional to that of footfalls: a sign that IGD’s business model is still valid and that the measures taken to safeguard the health of shopping center visitors were effective.

Hopefully the disclosure of this updated situation and the measures undertaken by IGD to overcome the crisis triggered by the lockdown will bring the market’s attention back to the Company’s fundamentals and make it possible to recalibrate the considerable gap that exists in terms of fair value indicated by the analysts’ consensus price.

The average target price of the analysts covering IGD’s stock was, in fact, €4.88 before the publication of the half-year results. Given the strong discount with respect to the stock’s recent prices, 60% of the brokers have a recommendation of Buy/Outperform, while 40% has a recommendation of Hold/Neutral. No broker has issued a Sell rating.